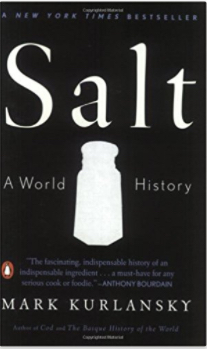 I’m a story junkie, so I primarily read fiction. But I like to weave the odd non-fiction book in here and there in the interest of learning new things. Several of my friends recommended Salt: A World History by Mark Kurlansky to me last year, and eventually I took their advice and read it.

In Salt, Mark Kurlansky reviews the history of the world through the lens of mankind’s dependence on salt. Access to salt (or the lack of it) has shaped everything from the predictable (the establishment of trade routes and the financing of wars) to the unexpected (the Wieliczka salt mine in Poland was converted into a vast entertainment complex in the early 17th Century, complete with ballrooms, dining rooms, and an underwater lagoon where the Crown would entertain royal guests).

Used as a currency and prized for its ability to preserve food (and mummies), salt has been at the heart of many of the world’s major historical events from the spread of the Roman empire, which used access to cheap salt to pacify the masses, to Gandhi, who changed the course of history by scooping up a handful of salt from a beach on April 5, 1930.

Much of what Kurlansky has to say about the history of salt is fascinating. Unfortunately, the coherence of his narrative fell apart in the last chapter. Unlike previous chapters, which generally focused on the ways in which salt had shaped a particular portion of the world, the last chapter was a hodge-podge of detail. In it, Kurlansky staggers from the invention of Tabasco sauce in New Orleans to the discovery of a salt mine in WWII Germany containing more than a thousand paintings and the battered suitcases of Jews sent to the concentration camps. We then take a brief detour to visit the brine-spring-based health spas of the 19th century. Then it’s off to Parma, where the prosciutto is cured with salt from Trapani. Next, Kurlansky bemoans the fashionable person’s bias against eating salt for health reasons and recites a gourmet recipe for sea bass, in which two pounds of fish is crusted in five to seven pounds of salt.  A moment later, Kurlansky swoops us off to 18th century Hawaii, where we eavesdrop on British captain James Cook complaining about the dirty salt produced on Kauai. And so on.

You get the picture.

It’s as if when he started writing the last chapter, Kurlansky realized he still had a huge file of fascinating tidbits and he simply couldn’t bear to leave any of them out. I have sympathy for that — Kurlansky clearly did an immense amount of research for this book — but the individual salt facts are so poorly connected they make this final chapter a bit of a slog.

And that’s a shame, because salt really is a fascinating lens through which to view world history.