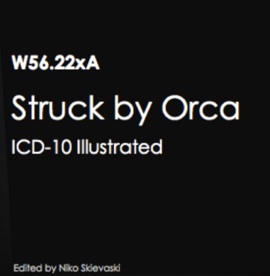 As most of you know, my husband is an ICU doctor at the University of Chicago. He’s also got a wicked sense of humor. So when Niko Skievaski released his collection of illustrated ICD-10 codes, it was inevitable that at least one copy would make its way into our house.

For those of you who don’t spend your lives navigating the US healthcare system, ICD-10 is an internationally used system to describe tens of thousands of medical diseases, symptoms, and illnesses. It’s astoundingly specific, with codes for conditions like “V91.07xD: Burn due to water-skis on fire, subsequent encounter” (not again!) and “W56.49: Other contact with shark.”

It’s also been used in Europe for years. What prompted this particular book is the introduction of ICD-10 into the United States.

In Struck by Orca, Skievaski showcases the illustrations of several artists with varying backgrounds in the medical field. Each has chosen one or more ICD-10 codes to illustrate.

Some of the illustrations are remarkably entertaining. The illustration for V61.6xxD “Passenger in heavy transport vehicle injured in collision with pedal cycle in traffic accident, subsequent encounter” shows a grinning five-year-old on a big wheel tricycle peddling away from an overturned 18-wheeler truck that is burning merrily half a block behind her.

I’m also a huge fan of “Z89.419: Acquired absences of unspecified great toe,” which reads “After years of toe-tal bliss, Mr. Hallux put on his best pants and left to discover the world.”

In other cases, the illustrations are fine, but it’s the idea of the code existing at all that prompts the laughter. As long as you don’t think too hard about the details, that is. In retrospect, it may be a very good thing that the illustration for “W61.62: Struck by duck, sequela” is a bit on the pedestrian side.

All told, this is a highly entertaining book that would make a great stocking stuffer for any hospitalist on your holiday gift list. Sadly for me, my resident hospitalist already has two copies.