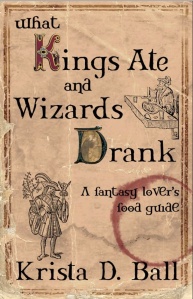 For me, reading books about writing is a lot like eating celery. I’ll do it (eventually) because I know it’s good for me, but I don’t expect to enjoy it.

I picked up What Kings Ate and Wizards Drank on the recommendation of David Gaughran, a member of Krista Ball’s writing group, because he promised it would be both hilarious and informative.

What Kings Ate and Wizards Drank gives a general overview of the food issues fantasy, science fiction, and historical fiction writers need to consider when constructing their worlds. How do you feed characters who insist on traveling on foot across vast swathes of unexplored territory? Can you let them forage, fish, or hunt for their food? If local laws prohibit hunting and/or fishing, and foraging is either seasonally impossible or merely inadvisable, how do you keep your character from starving? Worse, how do you feed an army? Forget the army. How do you feed anybody in the middle of nowhere? What if by some miracle your characters have leftovers, where do they put them if there’s no fridge? What’s it like to cook over a wood fire, in a wood-burning stove, or with coal? When your character gets hurt, what foods (and drinks) would they use for healing? And of course, the most important question:

“There is a Horde of Orcs Chasing Me. Can We Stop for Some Rabbit Stew?”

There’s also plenty of good stuff about how to use food to build a believable religious culture, to create conflict, oppress the masses, and otherwise illustrate class differences and prejudices.

And all of it is delivered in a style that manages to be informative, carefree, and highly entertaining. Take this bit on the development of alcohol from Chapter 9:

“But regardless how you drink it, hot, cold, with a spoon or with a straw, one thing is certain: beer, wine, and spirits are amongst the oldest drinks in the world. Perhaps that says something about us as a species. Our ancestors saw some robins drunkenly staggering around after eating berries, so we decide that looked pretty darn awesome and mass produced the staggering.”

In the introduction to the book, Ball explains that she wrote the book primarily for fantasy and science fiction writers and their fans. Consequently, she focuses on the cultures fantasy and science fiction writers draw upon most often to construct their worlds–Medieval England, ancient Rome, and the first peoples of North America. Steampunk writers will find a few tidbits here and there about the Victorian era as well, such as this one from Chapter 10, Foods that Heal:

“Steampunk heroines should also beware of pre-packaged medicines. Opium was regularly used in Victorian medicines, especially cough medicines. It was used because it worked. … Unfortunately, morphine addiction was very real in the Victorian era, so steampunk heroines need to be especially careful of the medications at the pharmacy. Then again, perhaps an addiction to cough syrup is exactly the kind of heroine you were looking for. If so, carry on.”

The nature of the book means that Ball doesn’t explore any single cultural setting in depth, but rather hops around among them as necessary to illustrate her points. Which is why you’ll find menus for feasts given by Pliny the Younger and Henry the VIII, but not one thrown by Queen Victoria.

Nor does she delve too deeply into any one issue. Rather, her aim is to raise the issues, illustrate what you need to think about to address them, and provide signposts for where to go for more information both within the text itself and in the rather extensive bibliography she provides in an appendix.

As a result, What Kings Ate is useful reading for historical fiction writers as well, even if Ball doesn’t address your time period of interest directly. After reading Chapter 5, ‘Tis the Season on the availability of food, I realized that in the current draft of Asylum, my own work-in-progress, one of the characters whips up a batch of blueberry muffins using fresh blueberries in April. Fine for a novel set in our age of globally sourced foods, but a bit problematic for a story set in the 1880s.

My only complaint is that the Kindle version of this book is riddled with typos. Most are minor and easy to decipher based on context: prefect being used in place of perfect, for example. But this one from Chapter 6, Where’s the Refrigerator? threw me for a bit:

“Pemmican is perhaps one of the best-known preserved food stuffs in North America. It’s often in the form of beef, bison, or elf jerky, often with BBQ sauce or peppercorns.”

Elf jerky? Surely she means elk. Then again, given her sense of humor (and the target audience), elf is just plausible.

But don’t let the typos put you off. Even if you have no plans to write fantasy, science fiction, or historical novels at all, there’s plenty to enjoy in this well-constructed and highly entertaining meditation on the literary logistics of food.