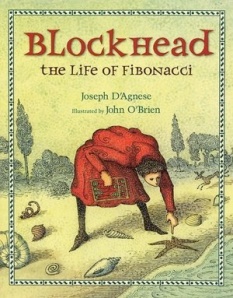 I come from a family of mathematicians. Although Vector Calculus pretty much ensured that I would never be a mathematician myself, my relationship with math is once more on a cordial footing. I’ve even caught myself accidentally looking forward to tinkering with math again as The Four-Year-Old goes through school. Naturally, when I found this book on Fibonacci, I brought it home immediately.

Fibonacci, widely considered to be the greatest Western mathematician of the Middle Ages, was born in Pisa in 1175 AD. Blockhead spins the few historical facts known about his life into a 40-page children’s book that describes Fibonacci’s struggles at school (where the teacher and other children mock him for daydreaming), and the way in which Fibonacci turned his father’s insistence that he become a merchant into an opportunity to learn as much as he could about his one true love, numbers.

Even if you don’t like math, there are a few reasons to check out this book.

First, Fibonacci approaches the world with a curiosity very much like a child’s. As a result, he discovered a pattern in nature that still surrounds us–a point that John O’Brien brings home in his illustrations. After reading the book, it’s great fun to go through and hunt down all the instances in which Fibonacci’s sequence appears in the illustrations. Or, say, in the park. (Pinecones and tree limbs and mums, oh my!)

Secondly, as the book makes very clear, words have power, but you don’t have to let them define you. The text spends quite a long time talking about how Fibonacci was called Blockhead by the people who supposedly knew him best (the ones in his home town of Pisa, you know, the ones who knew so much about math they built that highly improbable tower). Fortunately, he ignored them. Fibonacci traveled all over the world, learning all he could about numbers, and sharing what he had found with anyone who would listen. The folks in Pisa may not have appreciated it, but Fibonacci persevered. Which is why The Four-Year-Old is learning to write 1, 2, 3 at preschool today instead of I, II, III.

Finally, Blockhead provides one of the clearest explanations of Fibonacci’s sequence that I’ve ever seen. O’Brien’s illustration of the rabbit problem makes the discovery of Fibonacci’s original sequence very tangible for The Four-Year-Old. From there, the book proceeds in careful steps, relating the sequence to Fibonacci’s observations in nature, and following him as he translates the sequence to squares and ultimately, to the familiar spiral.

“Mommyo,” The Four-Year-Old gasped when she saw it. “That’s an ammonite!”

That’s right. Fibonacci just used math to draw an ammonite. It’s an idea that has set The Four-Year-Old’s mind on fire. The first night we read this book, she stayed up almost two hours drawing square after square and spiral after spiral on every piece of paper she could find in her room in the dim glow of her nightlight. This book is the reason she now has a reading lamp in her room that she can turn on and off by herself. (Hey, I remember what I was like as a child. More importantly, I remember the apocryphal story of “Why Mommyo wears glasses today,” in which reading by nightlight plays a pivotal role.)

And now it’s your turn. What are you reading this week?