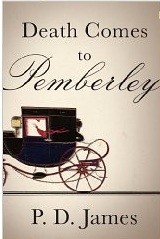 Like so many other PD James/Jane Austen fans, I opened this book with tremendously high expectations. In the middle of reading it, I found myself calling my mother to complain that I was bored.

I’ve done quite a bit of reflecting on why this book was so disappointing for me. PD James is a phenomenal mystery writer, and if anyone could write an intriguing mystery set at Pemberley it ought to be her.

Here’s what I’ve decided. Having discovered the great thumping mystery of a murdered man in the woods, Darcy’s first act is to ride off into the dark and stormy night to … wait for it … recuse himself from the investigation. This is the right and honorable thing to do of course, but PD James’ decision to then keep the story at Pemberley with the Darcys and away from the investigation means that we are treated to a novel full of narrative exposition about the Darcys’ life at Pemberley, process talk about the judicial system of the time, and relatively little action.

We miss out on the investigation and instead witness the trial with its dramatic conclusion, which must seem magical to us as the discovery of the exculpatory evidence was made by another set of characters entirely off screen.

In sticking so closely to the Darcys, PD James may have remained faithful to the conventions of Pride & Prejudice fan fiction, but she has missed out on the heart of her story. There is some interest in watching the Pride & Prejudice cast react to the stress of being the main witnesses in a scandalous murder trial, but not as much as there might have been in watching a set of contemporaries (imagined and realized as only PD James can) interact with the Darcys, Bingleys, Wickhams, and Colonel Fitzwilliam during the course of what must have been a delicate investigation with potentially significant social ramifications.

I’ve been asked whether I’d recommend this book to others or not. I think one of my fellow reviewers on Goodreads has gotten this right. Read the first few chapters of it. If you’re enjoying it, keep going. You’re in good hands. If you’re not, then pick up something more to your taste.

Have you read Death Comes to Pemberley? If so, what did you think of it?