Before I had a child, I vowed that I would read every book my daughter did until she went off to college. While my daughter could only read the books I read to her, this was easy enough to do. It only took about a week of my daughter reading on her own for me to realize that trying to read all of the books she read as well as all of the ones I wanted to read was a wildly unrealistic life goal. So instead, my daughter and I pick one or two books a month and read them together. Here’s what we read in July.

The Case of the Left-Handed Lady by Nancy Springer 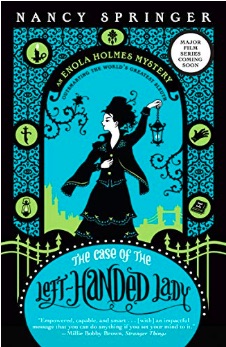 From the Book Description:

“Enola Holmes is hiding from the world’s most famous detective—her own brother, Sherlock Holmes. But when she discovers a hidden cache of bold, brilliant charcoal drawings, she can’t help but venture out to find who drew them: young Lady Cecily, who has disappeared from her bedroom without a trace. Braving midnight streets where murderers roam, Enola must unravel the clues—a leaning ladder, a shifty-eyed sales clerk, political pamphlets—but in order to save Lady Cecily from a powerful villain, Enola risks revealing more than she should . . .

In her follow-up to The Case of the Missing Marquess, which received four starred reviews, two-time Edgar Award winner Nancy Springer brings us back to the danger and intrigue of Victorian London as she continues the adventures of one of the wittiest and most exciting new heroines in today’s literature.“

While writing this post, I learned that The Case of the Left-Handed Lady is Book 2 in Nancy Springer’s Enola Holmes series, and not Book 1 as I had assumed while reading it. Springer handles the backstory so smoothly that this book works on its own as an introduction to Enola Holmes and her perilous personal situation.

Springer’s Enola Holmes is an interesting take on the Sherlock Holmes canon that casts Sherlock in the role of nemesis. Have no fear, Springer hasn’t turned Sherlock into an evil person, she’s just highlighted that he is a man of his time. He cannot endure the thought of his poor little sister having to make her own way in the world. What will become of her without Sherlock to protect her?

Enola, of course, very much wants to continue to make her own way in the world, so must dodge her excessively concerned brother for the bulk of the book. All while solving a very nice little mystery, of course.

I shared this book with my 12-year-old daughter immediately upon finishing it. We’re both interested in seeing where Springer takes Enola Holmes next.

Who Would Enjoy This Book 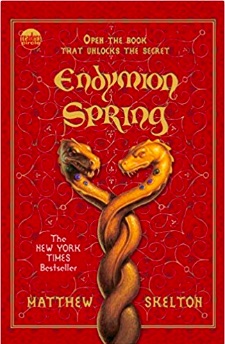 From the Book Description:

“In the dead of night, a cloaked figure drags a heavy box through snow-covered streets. The chest can only be opened when the fangs of its serpent’s-head clasp taste blood.

Centuries later, in an Oxford library, a boy touches a strange book and feels something pierce his finger. The volume is wordless, but fine veins run through its pages, and they seem to quiver, as if alive. Words begin to appear in the book—words only the boy can see.“

Matthew Skelton makes great use of the distrust the first printing press must have inspired to drive the plot of Endymion Spring. To a world in which books were rare because monks devoted years of their life to copying and illustrating them, the speed with which Gutenberg’s machine generated his Bibles must have seemed magical, and perhaps a little scary. Even more so when you toss in the fact that a printer’s assistant was called a devil. On the other hand, those rapidly printed books held the potential of making all of the world’s knowledge available to all of the world’s readers.

In Skelton’s version of history, there really is one book that contains all of the world’s knowledge, Endymion Spring. Unfortunately, that magical book looks blank to all but the right sort of reader. A secret society of persons have been hunting Endymion Spring for centuries without any real success.  Blake Winters, a boy who happens to be the just right sort of reader, stumbles across this magical book while waiting for his mother in an Oxford library. That discovery ends up pitting Blake and his sister Duck against the nefarious Person in Shadow, whose mind has been twisted and heart blackened by their search for the book.

Who Would Enjoy This Book